Vegan MoFo #3: A Tour of My Kitchen

I’m not posting about a recipe specifically today, even though I did work on one. 🙂 You’ll read about it later. Today was a catch-up-on-chores and do-ALL-the-things kind of day and it’s now 5pm and the first chance I’ve had to even consider doing a post at all.

I saw someone else post about what they considered essential in a vegan kitchen, so I decided to take pictures of mine and share them with you as my contribution today. I talked about my kitchen a little bit in a past post, but this time I’m going to show you inside my cupboards. Bear in mind that this is a 29′ trailer and so I’ve used every inch of space as efficiently as I can, if not in the most TIDY fashion.

This is my staples area. On the top shelf are a variety of containers with screwtops. Left to right we have barley, nooch, sugar, black beans, mixed rolled grains, pinto beans, bandaids, and a flour sifter. (Bandaids there because GooGoo can’t reach them.) On the bottom shelf there are garbanzo beans, white flour, wheat flour, rolled oats, granola, and a crockpot. These are all the staple foods we use the most. 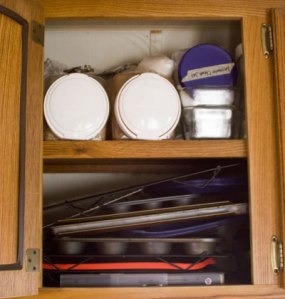 Next over we have brown rice, cocoa powder, bag of cocoanut, instant clear jel, and bread pans on the top shelf, and a mishmash of Pyrex lids, cooling racks, muffin tins, and baking sheets on the bottom. And a bonus pennywhistle, because Mr Pine Nut sometimes plays during or after mealtimes.

Top shelf: gluten flour, box of matzo, half the popcorn popper, tapioca pearls, popcorn, and an empty space where the pressure cooker is kept when not in use. Bottom shelf: pie pans, Pyrex cake/casserole pans, electric skillet, small saucepan and skillet. The electric skillet is an amazing thing to have in this tiny kitchen.

Under the staples cupboard (the first picture), we have a toaster, food processor, olive oil, and blender. And a drying ziploc bag. Because yes, we’re the crazy cheapskates who wash and reuse them until they shred or break open at the seams. 🙂

Cookbooks! Tomato powder! The other half of the popcorn popper! And random cans of beans, olives, and jarred salsa!

This is the (currently rather paltry) fridge door. All I have in here at the moment is tahini, Nucoa, yeast, liquid smoke, Worcestershire sauce, lemon juice, and hot sauce. I think those are peanuts in the bag. 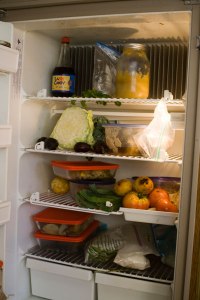 Again, this is rather a paltry example of in-fridge supply. Usually I have loads of Pyrex full of cooked rice and beans and leftovers. Loads means “more than the four in this picture”. Those are tomatoes and cabbage from our garden and that’s hickory-smoked applesauce on the top shelf. *

And finally, the crowning glory of my kitchen: the spice drawer!!!1! This is the top layer.

And this is the bottom layer. It’s like a puzzle that has to go in just so, or the drawer won’t close. I LOVE MY SPICE DRAWER.

*Actually, it just burned in the pan, but rather than throw away a Rather Large Batch of Applesauce, we’ve been eating it bravely for some time now and alternating it with Non-Hickory-Smoked Applesauce.

i have told the truth
In the Soup Together

The Pearl Thief
declare the causes

i will tell the world

The World of YA

a podcast by and for YA readers

Too Cheap for Pine Nuts

Plant-Based Food and Other Stories

This WordPress.com site is the bee's knees

we're all just stories in the end